Healthcare Policies and Programs: A Closer Look at Medicaid, Medicare and the Affordable Care Act 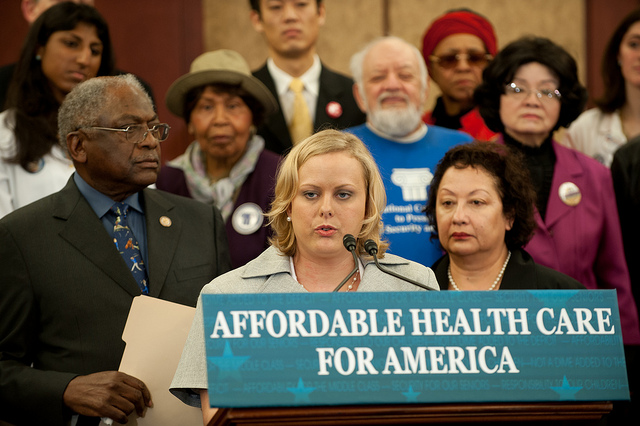 The U.S. healthcare industry has a tremendous effect on the lives of every U.S. citizen. According to the U.S. Centers for Medicare and Medicaid Services (CMS), in 2019 expenditures on healthcare in the U.S. totaled $3.8 trillion, or about $11,582 per person.

Over the years, several historic healthcare policies and programs have shaped how each of us accesses, receives and pays for healthcare. Medicaid, Medicare and the Affordable Care Act are among the healthcare policies and programs that have affected healthcare most significantly. The creation of the Medicaid and Medicare programs in 1965 fundamentally altered the manner in which individuals living in poverty and seniors obtained healthcare. Similarly, the enactment of the Affordable Care Act in 2010 represented some of the most dramatic healthcare reforms the U.S. had ever seen.

It’s important for students in Healthcare Master of Business Administration programs to understand the significance of Medicaid, Medicare, and the Affordable Care Act and how they have influenced the healthcare industry we have today.

The Medicaid program began in 1965 and initially offered healthcare coverage to Americans who received cash assistance (then known as welfare). The program was later expanded to provide healthcare coverage to low-income families, pregnant women, people with disabilities and people who needed long-term care. Beginning in 2014, states had the option to expand their Medicaid programs to cover certain nonelderly adults. Because each state makes its own decisions about how to run its Medicaid program, there can be significant variations in Medicaid services from state to state.

Medicaid benefits are usually delivered through two models: fee for service (FFS) or managed care. The FFS model pays healthcare providers for each service they provide to an individual, while the managed care model provides services to recipients via an organization that contracts with the state.

In studying healthcare policy, it’s important to understand that Medicaid is funded by both the federal government and state governments. Federal Medicaid funding is considered to be an entitlement and open-ended; therefore, there is no maximum amount of federal funds a state can receive for its Medicaid program.

Although separate from the Medicaid program, the Children’s Health Insurance Program (CHIP) was created in 1997 to give states enhanced federal financing and greater flexibility when compared to Medicaid. CHIP was created to address the 10 million children in 1997 who did not have health insurance because their families’ incomes narrowly exceeded Medicaid eligibility levels.

According to CMS, as of October 2019, approximately 64.7 million individuals were enrolled in Medicaid. CMS projects that Medicaid expenditures will grow at an average annual rate of 5.3% and total just over $1 trillion by 2027. The Kaiser Family Foundation has noted that enrollment in Medicaid decreased from 2017 through 2019, but began to increase at the beginning of the COVID-19 pandemic in February 2020; it noted that enrollment may continue to increase as the economy recovers from the effects of the pandemic.

Critics of Medicaid charge that the program’s costs are soaring and coverage is not adequate to meet enrollees’ needs. Critics also contend that Medicaid is a poor solution to broad inadequacies in education, housing and food that affect health.

Consulting firm McKinsey and Company has identified the following challenges that state Medicaid programs will need to address as they continue to progress:

It’s critical for any student of healthcare policy to have a basic understanding of Medicare. Enacted in 1965, the Medicare program enabled Americans ages 65 and older to see a doctor without fear of substantial bills. In 1972, the Medicare program was expanded to cover individuals with disabilities and those with end-stage renal disease. Another significant expansion of Medicare occurred in 2006 with the addition of a prescription drug benefit.

The basic “parts” of Medicare provide a good overview of the program. Specifically:

Knowing how Medicare is funded is critical for any student of healthcare policy. A number of sources fund the Medicare program, such as:

According to CMS, in 2019 approximately 61.5 million people were enrolled in Medicare. CMS reported that Medicare expenditures in 2019 were approximately $799.4 billion. In addition, CMS projects that Medicare will experience a spending growth of 7.6% per year from 2019 to 2028, primarily due to projected enrollment growth.

Critics of the Medicare program point toward rising expenditures and the opportunity cost associated with spending funds on Medicare rather than on addressing other issues in areas such as social justice, education, mental illness and poverty. Critics also note that hospital stays can still be costly to Medicare enrollees. Some critics also point to the fraud that medical professionals who accept Medicare have committed.

The American Academy of Actuaries has outlined the following challenges facing the Medicare program:

The main aim of the Affordable Care Act (ACA), which was enacted in 2010, was to give all Americans access to healthcare. This was achieved through the introduction of individual mandates, requiring all U.S. citizens not enrolled in an employer-sponsored health insurance plan to sign up for private insurance. In 2017, however, Congress basically eliminated that mandate (by eliminating the penalty for not obtaining insurance), and that change became effective in 2019. The American Rescue Plan of 2021, a federal COVID-19 relief package, temporarily reduced the cost of healthcare insurance under the Affordable Care Act by increasing subsidies for health insurance premiums.

The Affordable Care Act marked a significant change in healthcare policy. Its reforms made it illegal for health insurers to reject customers based on previous health issues, while also creating a minimum standard for health insurance policies across the country. The act also made purchasing health insurance easier for the consumer. The appearance of government-regulated insurance exchanges — websites from which customers can compare and purchase policies — has increased transparency in the industry and made it more consumer-friendly.

As of 2021, more than 31 million Americans had accessed health insurance through the Affordable Care Act. However, the act has been one of the most controversial healthcare policies enacted in recent years.

The Affordable Care Act has been criticized for putting an already stretched U.S. healthcare system under further duress. The act also is projected to lead to a marked increase in the volume of cases the U.S. healthcare system deals with each year. As care becomes more affordable, it is only natural that the number of those seeking treatment — both essential and nonessential — will grow. This leads to an increased demand for professionals in all aspects of the healthcare industry, from nurses and doctors to administrative and logistical experts.

As more Americans acquire health insurance under the act’s provisions, the increase in case volume will pose new and challenging logistical problems. Just how effectively these challenges can be met and overcome will be key to the future of the Affordable Care Act, and of the healthcare system as a whole.

Despite the criticisms and challenges to the Affordable Care Act, it’s important to note that, as of June 2021, the U.S. Supreme Court had upheld the act on three separate occasions.

Leading the Charge Toward More Efficient and Effective Healthcare

The complexities and challenges associated with U.S. healthcare policies and programs present opportunities for leaders in healthcare to make significant improvements in the provision of healthcare to all Americans. Individuals who aspire to lead the charge toward a better healthcare system can explore the George Washington University online Healthcare Master of Business Administration program to see how it can help them achieve their career goals. Chart a course for a rewarding career as a leader in healthcare today.

What You Can Do with an MBA in Healthcare Administration

Which Innovations Are Revolutionizing Healthcare Today?

HealthMarkets, “The Surprising Pros and Cons of Medicare”

McKinsey and Company, “Five Trends Shaping the Future of Medicaid”

Medicaid and CHIP Payment and Access Commission, History and Impact of CHIP

Medicare.gov, How Is Medicare Funded?

Medicare.gov, What’s Not Covered by Part A & Part B?

NPR, “Obamacare Wins for the 3rd Time at the Supreme Court”